Carl Johan Hagman, CEO Stena Line and head of all maritime activities in the Stena Group. Carl Johan has a long and successful background within the international shipping industry. Trained as a maritime lawyer in his native Sweden, Hagman spent the first eight years of his career with Walleniusrederierna AB and its affiliate Wallenius Wilhelmsen Lines. 2002-2007 he served as Chairman and Chief Executive Officer of Eukor Car Carriers Inc. based in Seoul, Korea.

In 2007 Carl-Johan returned to Sweden as Chief Executive Officer of Rederi AB Transatlantic and left for Höegh Autoliners AS in Oslo in 2008. He joined Stena in 2011.

Having lived and worked in Asia for 22 years, Carl-Johan has gained a unique understanding of different business cultures and he is very engaged in leadership issues.

We speak about alternative fuel and Sulphur Emission Control Area, (S)ECA, in the episode and the methanol project that Stena is currrently runnng on STENA GERMANICA.

Once you have listen to this episode, head on over to iTunes and kindly leave a rating and a review and don’t forget to subscribe! Shippingpodcast needs to be spread to a wider audience! 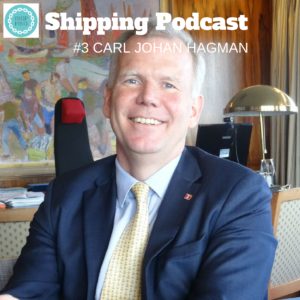